Skip to content
The effects of climate changes in the past: the Maldá anomaly

The effects of climate changes in the past: the Maldá anomaly.

Far from being a new phenomenon, climate changes have been common events in the past, from catastrophic cases like the Ice Age too much more limited experiences like the Medieval Climate Optimum or (10th-14th centuries) or the Little Ice Age (14th-19th centuries).

However, one of the big differences between climate changes in the past and the one we are experiencing today derives not only from their origin but also from the speed in their development. This is a key point that affects the adaptation capacity of society or the economy, especially for producers in the agrarian sector. For instance, facing a gradual global cooling a farmer can decide to substitute cereals that are less resistant to cold temperatures by other grains more able to endure them, so the adaptation of production to the new conditions can be carried out in an orderly manner. However, when the changes are abrupt or unstable, the adaptation capacity of producers is substantially reduced.

Not very well known and located at the end of the previously mentioned Little Ice Age, a climatic anomaly with very particular features took place during the second half of the eighteenth century, characterized not just by high variability between years alternating events like droughts or floods in short periods of time, but also with a high variability of these events within the year. This is precisely the sort of anomaly where the adaptation capacity of agrarian producers is practically eliminated, both for the fast speed of the changes and for their unpredictable direction.

In this work, Mariano Barriendos y M. Carmen Llasat analyses the most significant changes of the “Maldá Anomaly” (c. 1760-1800), name is given as a tribute to the Barón of Maldá, a nobleman from Barcelona who described in his writings the strange behavior of climate during these years. The authors show how the dramatic climatic variability of the anomaly described in documents like diaries coincides with the information obtained from instrumental measurements. The variability of climatic conditions and the exceptionality of certain events is perfectly described in the following text of the Barón of Maldá, collected in their work.

“The matter of the thunder was most unexpected as it is an extraordinary phenomenon, for storms normally begin in the middle of April and go on until October. This shows that the climate has undergone a mutation and the weather has changed concerning the seasonal sequence many years ago.”

The same authors show that in 1803 the authorities of Girona wrote an unusual annotation in their records, describing surprise that the last summer had been hot and dry, unlike any other in the previous 30 years.

Did agrarian producers really suffer during this climatic instability?

The following graph extracted from recent joint work with Carlos Álvarez-Nogal and Leandro Prados de la Escosura and published in Cliometrica shows that the beginning of the anomaly created an inflection point to a period of growth in agrarian production that had been sustained since the beginning of the eighteenth century. The fall reached its minimum coinciding with the most intense years of the anomaly, not being able to recover the levels previous to its beginning. A detailed analysis of the agrarian series shows that the fall in production was more intense in the interior of Spain, an area characterized by more marginal terrains. It is precisely in the interior where if climate changes were responsible for the crisis we should observe, as we do, a fall more severe than in the periphery. 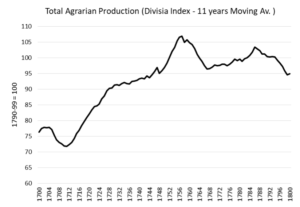 In any case, the evidence shows that either for the simple coincidence of a causal relationship, the start of the Maldá Anomaly in Spain produced a rupture in the sustained growth that started at the beginning of the century. The large volatility of climate between and within the years did not help producers much to adapt their production to the changing weather. The fact that the fall of agrarian production was larger in the regions of the interior that are naturally more vulnerable to suffer from changes in climatic conditions, suggests that the connexion between both events is not unreasonable. The end of the anomaly at the beginning of the nineteenth century however did not imply an improvement in the evolution of agrarian production, which began a new fall consequence of the institutional and political instability that shacked Spain and all of Europe, but that is another story.